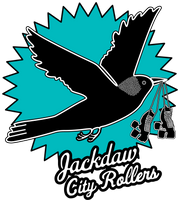 Email (anything and everything)

Uppsala Roller Derby was founded in the fall of 2011. Our A-team, Jackdaw City Rollers, had their first bout in June 2014 and now plays in Sweden's Division 2. BURDs, our B-team, are not in an official division but love to scrim against willing opponents. Since the fall of 2017 we have also had the pleasure of having a junior team, Jackdaw Chicks!

Uppsala Roller Derby is run by members for the members and consists of several working groups to make all the magic happen, both on and behind the scenes.

Roller derby first began in USA in 1935. Since then roller derby has taken many different forms, some on banked tracks, some with focus on speed and racing, some with both theatrical and real aggression. Since early 2000's most derby is played on a flat track, still with plenty of aggression but with more focus on team and sportsmanship. And silliness.

There are 14 players per team, 5 of whom are on the track at any one time. On track, each team consists of a jammer and four blockers, one of which is called the pivot.

The Jammer can be identified by the star on their helmet cover and is the point scorer of the team.

The Blockers make up the rest of the pack. It’s their job to help their jammer through the pack whilst simultaneously stopping the other team’s jammer.

The Pivot, also a blocker, can be identified by the stripe on their helmet cover. This player is able to become a jammer in certain situations.

Roller derby is played on an oval track, in a counter-clockwise direction (derby direction). Each game (bout) is made of two periods of 30 minutes each and each period is divided into jams of max 2 minutes. At the start whistle, the jammers start behind all blockers and try to get through them (whilst blockers try to stop the opposing jammer to do so). Once out of the pack, the jammers speed their way around the track and then try to go past the blockers again, and again and again. Not counting the initial pass, for each opposing player the jammer passes legally, 1 point is scored. The jam goes on until the lead jammer (the one who first exited the pack) tapps their hips with both hands or after two minutes. After a 30 second pause, another jam starts.

Roller derby is a contact sport and at times it can seem lawless but there are so many rules! All of them to ensure the players' safety and the flow of the game. If a rule is broken, a player is sent to the penalty box for 30 seconds. 7 skating officials (striped shirts/zebras) make sure the rules are being followed, and countless non-skating officials (NSO:s) (usually pink shirts/flamingos) keep track of everything that is happening.

Support comes in many forms! Please come and cheer at our bouts and check out our fantastic merch. You can also donate through Swish nr 123 21 20 764, using message "URD donation"! Donations help us organise home-bouts and boot camps, travel expenses for away-bouts and various teambuilding exercises. Whichever form it may take,

THANK YOU FOR YOUR SUPPORT!

There are many ways to get involved in the derby community. An easy way to start is to be an NSO on any of our events! It's really fun and you get a front row seat to the action.

Each year we host try-ons where you can see what it's all about. After the try-on session we have a 12 week beginners program to teach you all the minimum skills you need to play roller derby.

Do you already have your min-skills?

Get in touch with us and we can arrange a transfer to the Jackdaws!

Any questions? Feel free to send us a message and we'll get back to you as quickly as we can!

Other ways to get in touch with us:

Email (anything and everything)